What you endure is who you are, and if you just accept and do nothing then life goes on, but if you see it as a way to change, life doesn’t have to be this unfair, life can be better, maybe not for me, I can’t change the past, but maybe for the future, so others don’t have to endure what I did. -- Patsy Mink, Courtesy of NBC News

Patsy Mink in Congress, Courtesy of Library of Congress 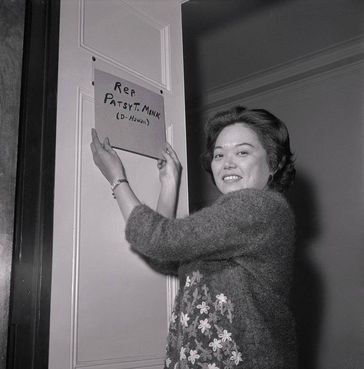 Patsy Mink with her Handwritten Representative Sign, Courtesy of Emaze
Patsy was born in 1927 in Paia, on the Hawaiian island of Maui. Born a third generation Japanese American woman, discrimination and hatred was destined to follow Mink her whole life. She became the first female class president and valedictorian in Maui High School history. Her dream was to become a physician, so she applied to twenty medical schools, but every single school she applied to denied her admittance due to her gender. Believing discrimination against her was wrong and uncalled for, Mink began studying at the University of Hawaii, where she became the first Japanese American to graduate. She also attended University of Chicago Law School, Wilson College, and University of Nebraska, where she was forced to live in the 'colored dorms' and wasn't allowed to take certain classes. The dorms that were for the people of color were rundown, air conditioning and heating systems were faulty, electricity didn't work half the time, they were not suitable to live in. They had mistaken her for an immigrant from Asia, unknowing of the fact that she was born in Hawaii, an American territory. Patsy was outraged, she arranged a group of protesters to fight the discrimination, to take a stand for their basic human rights. With the help of Mink and her supporters, they ended the segregation at UoN, and helped spark the desegregation of colleges across America. After graduation, Mink moved back to Honolulu where she began her law career. In 1953 she passed the bar exam and began practicing law, until 1955 when she became the attorney for the Hawaii territorial House of Representatives. In 1959 she was elected to the Hawaii territorial senate, and in 1962 she was elected into the Hawaii state senate. From 1965-1977 she was a member of the U.S. House of Representatives.

“We must assure that schools all across this country implement and integrate into their curriculum, policies, goals, programs, activities, and initiatives to achieve educational equity for women and girls.”
- Mink, Courtesy of The History House 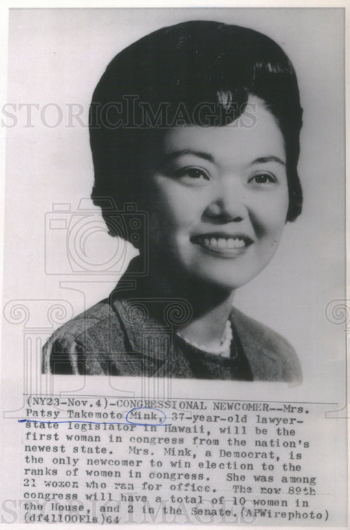 Patsy Mink in the News, Courtesy of Library of Congress 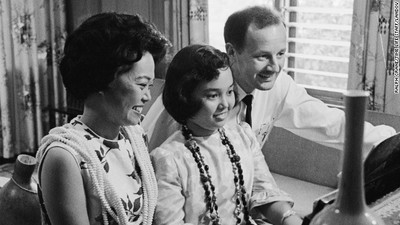 Patsy with daughter Wendy and husband John, Courtesy of CNN 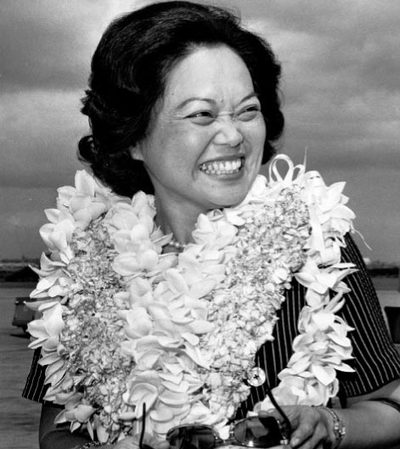 Patsy Mink Ran for President in 1972, the same year that Title IX was passed. She ran in the Democratic party as an 'Anti-War Candidate' in the Oregon primary. Mink did not receive a substantial amount of votes due to her gender and race, and instead of letting that dictate her decisions, she ran for congress yet again and was elected. She served in congress until 2002 when she passed.
"Congresswoman Mink was a vigorous and tireless champion of women's rights, an early and vocal opponent to the Vietnam War, and a leader on issues involving education, the environment, welfare, and civil rights. With her election in 1964, Mink became the first woman of color and the first Asian American woman to serve in Congress. She represented the people of Hawaii during two periods, the first from 1965 to 1977 and again from 1990 until her death in 2002. In between, she served in the Jimmy Carter administration as an assistant secretary of state for oceans and international, environmental, and scientific affairs (1977-78), was president of Americans for Democratic Action (1978-81), served on the Honolulu City Council (1983-87), maintained a private law practice (1987-90), and founded the Public Reporter (1989-91), an organization that monitored and publicized the activities of the Hawaii state legislature." -- Courtesy of Library of Congress