In November of 1956 Mink was elected to the House of Representatives for Hawaii, in 1959 she was elected into the territorial Senate for Hawaii. Later in March she lost her job when Hawaii become a state, so she ran for Congress but the seat was given to Daniel Inouye, a ‘war hero’. Pasty ran once again in 1962 and won a seat in the Hawaii Senate by a landslide. Then in 1964 she ran for Congress and kept her seat in the House of Representatives for six full terms. ​

"From her first day in Congress, Mink was not afraid to take a stand" - Courtesy of The Encyclopedia 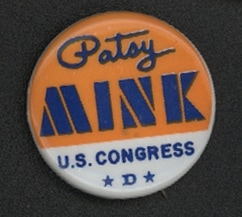 Patsy Mink for Congress Lapel Pin
In 1976, Mink ran for an open seat in the United States Senate, ultimately giving up her seat in Congress. Unfortunately, she lost the primary election to Spark Matsunaga. President Carter made Patsy the Assistant Secretary of State for Oceans and International Environmental and Scientific Affairs in response to her loss.

During the 107th congress, Patsy gained prosperous support from congress members to help create extra educational plans and possibilities for lower-income families and those on welfare. Mink also co-wrote laws protecting the environment regarding land and water communities changed by coal mining. Patsy's intentions were to promote equality in every way for any person from all walks of life. Title IX, her environmental safety laws, her anti-Vietnam claim, and her fight to end racist injustice across America are just a few examples of how Mink took a stand in our nation's history to create a better, safer, and more pleasant world to live in.